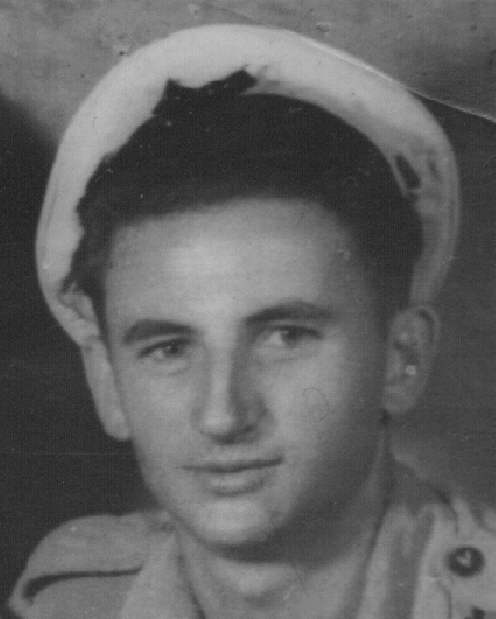 Note: Although Trevor Murphy served in the Royal Navy from 27th May 1942, the extract of his diary commences from the time he joined No.812 Squadron on 11th December 1944 until arriving back in the U.K. on 7th April 1946.

Sunday 11th February 1945.   Flew off of carrier in Barracuda with 11 other Barra's to fly to RNAS. Ayr to pick up some new aircraft and also for compass swinging. Trip uneventful except we nearly cut the tail off another aircraft whilst in flight.

Tuesday 20th March 1945.   Arrived at Gib. but only stayed for a short period. Same day left for Malta.

Friday 23rd March 1945.   Arrive at Malta and went ashore with Squadron to HALFAR.

Wednesday 6th June 1945.   Set sail again through the Suez for Aden arrived at Aden on the 8th and we only stayed for one day.

Saturday 9th June 1945.   On to Ceylon where on arrival, I flew off in a Barra for Trincomalee, after on staying there for an hour we flew onto Katukurunda near Colombo. It was here we stayed for approx. 6 weeks. Then on to Australia, where we arrived off Fremantle then on to Jervis Bay where both Squadrons were disembarked to Nowra.

Wednesday 15th August 1945.   North to the Admiralty Isle Manus where we stayed for a few days. I was put ashore at Ponam with five other chaps and six kites but only stayed for 2 days. Onwards again ever going North until we came to the Philippines Leyte where we stayed for one day then onto Hong Kong.

It was at this port that the ships company along with other ships company's went ashore to disarm the Nips. We were billeted in Victoria Barracks where we were detailed to guard warehouses, ammunition dumps etc. etc. Then across the harbour to Kowloon where the rest of the guard duties were composed of guarding Jap prisoners of war at Argyle St. P.O.W. Camp. After a 2 months period squadron came ashore at Kai-Tak aerodrome. Back on board on the 20/12/45 for the coming Xmas festivities. Entertained 240 Chinese children on board on the 24th.

Between the 1st and 12th of this month:

The forenoon of each day was taken up cleaning and servicing the aircraft, but in the afternoon and during the dogwatches different sports, contests were arranged. The two squadrons, ships company, Marines and of course the Australian's. The outcome of these contests were Aussie's 1st, 812 Sqdn. 2nd, Marines 3rd, 1850 Sqdn. 4th, ships company 5th.

Thursday 10th January 1946.   Two days before the Aussie's disembarked they made a collection between them then presented it to the ship Capt. (Neame) with a message that the money be spent on wireless sets for the ships company. The money totalled Ł74.16.9d.  Then a corporal stated that he was speaking on behalf of the Aussie's, stated that the short journey to home had been very pleasant. Also their accommodation had been 'Fair Dinkum'.

Saturday 12th January 1946.   Arrived in Sydney harbour at 09.00hrs. Troops disembarked at 13.15hrs. Ashore in Sydney. As the troops left the Vengeance to board the Ferry they gave three rousing cheers and were returned with three more from the ship. The following days on board seemed to be empty but the majority of us were excited with the thought that we were proceeding on 10 days leave on the 18th. These days were lazy days considering there were no aircraft aboard, as they had flown off just before we docked in Sydney.

Saturday 19th January 1946.  This day was very quiet as all shops were shut in the afternoon and evening, so we stayed at home and listened to the horse racing all afternoon.

Tuesday 22nd January 1946.   Sent two telegrams home, also one to Irene congratulating her on giving birth to a baby boy. The days that followed were days of comfort and big eats but there was always something missing. Took a trip to Penrith to look up Ginger Wilkins.

Monday 27th January 1946.   Last day of leave spent in packing and loafing around the house. Choca. I must say that the last 10 days were days of high living.

Tuesday 28th January 1946.   Reported back to Schofields and was told to leave my gear packed as I was to report to Golden Hind for passage home.

Wednesday 29th January 1946.   (HMS. Golden Hind)  It never occurred to me during the time I entered the gates of this place that it would be a whole month before I walked out of them again, that is of course except for going ashore. And the days were wasted away by either going ashore or getting my head down after drinking my fill of rum. So between the 29th Jan. and the 26th Feb. the days past with nothing out of the ordinary happening.

Days were beginning to drag and I was becoming impatient seeing different chaps from the mess leaving to join different and the majority had higher group numbers than I, so I decided to go up to see the Drafting Master at Arms to get some action also to see if they had forgotten all about me, but nothing could be done for me. I just had to wait my turn with thousands of others.

During my stay at Golden Hind I managed to get ashore and visit Len and his wife and they said, no matter what time of day or year, I would always be welcome and if I ever came back to Sydney with my future wife I was to immediately make for No.9 Derby St.

Friday 15th February 1946.   Buzz came around the camp that the next to be balled out in the gym next Tuesday and everybody up to 48 group were to be on the draft. Joy of course, bags of excitement. Well I don't know about anybody else but I was waiting for Tuesday morn.

Tuesday 19th February 1946.   When it did eventually arrive the gym was packed with Naval personnel. Then the names were called out. You could hear a pin drop. The names were called in alphabetical order so I was well down the list. My mates names were being called out, so if their groups were up, mine must be, as they were 49, 50 and 52. Then as they came to the 'M' I could feel myself going cold and shaking somewhat, then as the name was called, my reply (aye-aye) was nothing but a squeak.

Monday 25th February 1946.   The Great Day. Walked out of the gate for the last time and boarded the train for the docks. Went aboard (S.S. Orion) and got fixed up. Went ashore in Sydney for the last time.

Reproduced with the kind permission of Kevin Murphy (son).