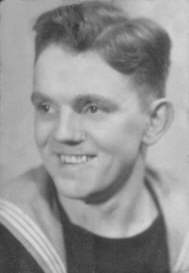 The early morning light was slowly moving the dark shadows into the background. Exchange Station had muted lighting to combat the blackout paint covering the whole of the glass roof.

The firemen on the 4am. milk train to Southport were busy stoking the firebox of the engine, preparing for the first trip of the day. This station, one of many scattered around Manchester and its suburbs, was normally its busiest along with its near neighbour Victoria. In the year 1943 when all travel was restricted to essential journeys the only passengers at this early hour were servicemen and women. My own journey was very essential, even if not strictly legal, in the Navy's eyes that is, for I had just completed a short visit home to see my family and girlfriend. The major snag being.....the Navy didn't know about it.

The driver and guard arrived and following a well worn routine, the driver climbed aboard the engine and the guard had a quick look around the platform. "Everyone aboard?", "Doors closed?", another quick look, the passengers, myself included, gritting their teeth in frustration and he finally waved his square oil lamp with the Green glass sides and the driver gently fed the steam into the cylinders. The guard casually swung into his van at the rear of the train and a few heads popped out of the carriage windows watching the black smoke rising to the top of the arched railway roof. The engine began to gather speed, its wheels spinning in desperation, striving to get a grip on the metal track below, the powerful engine adding its own feelings as it blasted clouds of black smoke to add to the clouds hovering there, defying the wind.

I was returning to a Naval Air Station close to a town called Burscough Bridge and I had made this trip home as often as I could because I was due to go overseas. I settled down for the relatively short journey, not knowing that this particular one would have a profound effect on my future.

After I left the train I had about a mile to walk to the Camp and as I came closer, the usual adrenalin started to pump, just in case my unofficial trip home had been rumbled. This time the adrenalin was right. The guard on the gate, who was a friend of mine said, "I'm sorry Les I have to turn you in, they tannoyed for you last night". My heart hit the top of my shoes and 50lb. weights held my feet to the floor.

I walked reluctantly through the Guardroom door and said to the Petty Officer, who had an enquiring look on his face, "I'm Harris P.O.". I could have sworn he licked his lips when he said, "So you're the one who's absent without leave, give me your station card". (a little red or green card handed in when a sailor leaves his ship or shore station) "Follow me laddie".....I did, straight down the corridor and into the cells. The Navy's priorities were such in those days that they probably had the cells built first. Every sailor I knew, swore that if Nelson had returned, he could have taken over a Fleet again once he had learned about the modern ships. I found out that flogging had only been removed from the Navy punishment list in 1964. My informant told me that he himself had received six strokes in 1961. Thank God they had abolished keelhauling before then.

He locked the cell door behind me and as I looked despondently through the open bars the sinking feeling deposited me on the hard bed behind me, a one inch thick mattress between me and the unbending wire mesh beneath.

I felt miserable and dejected as I thought of the arrangements I had made before I left home, to meet my family in Blackpool who were spending a few days there along with my girlfriend. Who knows? I may never see them again. Such were the thoughts racing through the mind of a very confused 18 year old sailor.

As I sat there my despair changed to defiance, I hadn't committed a major crime, all I had wanted, was to spend as much time with my family as possible, particulary knowing the next visit could be my last. To hell with them, I am getting out of here. But how?.....what would Bugs Bunny do?....simple....he'd walk out....so I did.

"P.O." I shouted, "I need to go to the heads (toilets). As he unlocked the cell door my heart was banging like a trip hammer. If he follows me down the corridor I've had it, if he can't hear my heart thumping he must be able to see it bouncing around inside me. These thoughts were driving me crazy as I walked towards my freedom, to the door leading to the outside, trying desperately not to break into a run. I made it and walked towards the heads. A quick look around and I dived behind the brick building in front of me, through the wire fence (so much for war time security) and onto the grass behind.

The time was approximately 6am. and the camp was welcoming a bright sunny day. Myself, I was wishing for an eclipse of the sun to cover my jailbreak. The idea of breaking out was great when I was locked in the cell, but what the hell do I do now?.

I had to get away from there as quickly as possible but how?. The railway line running parallel to the camp put a crazy idea into my head. 'You can't Les....I can....So I did.

I started to run down the centre of the railway track hoping that no one would see this crazy sailor legging it down the line. With my hat jammed on my head, blue collar, a dead giveaway to anyone who was interested, my bell bottoms flapping about my legs, I settled into a steady rhythm, making every stride hit the third sleeper on the track. Looking back to those days I must have been crazy, the only piece of human rolling stock in the history of that railway line. When I ran through the centre of Burscough Junction station, the solitary person standing on the platform probably thought I was the 6am. from Southport running late.

I silently blessed the many hours of training that my various sports had inflicted upon me as I ran on, revelling in my freedom. The sun beginning to feel warm on my back. I was laughing inside, thinking that I had beaten the system, yet I couldn't quite get it out of my mind that sooner or later the system would take its pound of flesh....I had to place as great a distance as I could between me and the camp before I joined the road running adjacent to the line (I subsequently discovered that the M.P.'s had been looking for me at the wrong station) if I had left the track too early, my escape would have been short lived. I had probably run about three miles and thought it was time to leave the track, thanking my lucky stars a train hadn't been on the same line. I saw a gap in the bushes on my left and made a beeline for it, once through, the glorious site of a field and the roadway beyond put life back into my legs, legs that had been reminding me they wanted to give up the ghost, but not now mate....

A quick hitch-hike down the road into Preston station, ever alert for the Navy Patrols lurking around the platform and I was very soon with my family in Blackpool.

The trip was spoiled by the nagging thoughts of my achievements. I was now a criminal in the eyes of the Navy. Of the reluctant lies I had told to explain my few days leave and the further lies told when the next door neighbour, on our return home, couldn't wait to inform us that, 'The Police had been looking for your Leslie'. I wasted a few more miserable days at home expecting another visit from the Police and I finally left to face the music. I then became scared and put it off, always intending to return but never being able to pluck up the courage to do so. I wandered around Manchester for three days, returning to sleep in my father's garage overnight. I was finally caught in an amusement arcade by a pair of giant detectives (they seemed like giants to me). They took me to Mill Street Police Station and I was strangely relieved. The two cops were very kind, but it didn't stop them ringing my Station, although they did shake my hand when the jeep came to pick me up.

By a strange twist of fate or whatever, the P.O. who had allowed me to escape was waiting to greet me on my return. To say he was licking his lips in anticipation, would have been a slight understatement. He had received the full wrath of the Captain for allowing it. I went back to my en-suite? cell and three days later I was lined up in front of the whole ships company, having the charges read out. The same jeep then took me back to Preston and the big iron gates of the prison loomed in front of me. The gates clanging shut behind me, once again sending my heart plunging into my boots.

One important thought emerges from this part of life....before I was sentenced to go to jail, a posting came for me to go to Ceylon (Sri Lanka). Two aircraft carriers were being bombed by the Japanese Kamikaze planes....would I have been on one and would I have been here to tell this story?. Maybe I wasn't so crazy after all....