Charles Wintringham was a RNZNVR pilot of 812 squadron in 1944 - 45.  He wrote an account of his wartime service for his granddaughter.  This section, provided to the H.M.S. Vengeance website by his son, Michael Wintringham, may be of interest to Society members.  Charles Wintringham takes up the story when 812 Squadron was 'working up' on H.M.S. Vengeance in the Firth of Clyde during late February and early March 1945:-

"Although we did not have our own aeroplanes it was arranged that, as far as possible, each pilot flew the same plane.  The plane I usually flew had, at some time, suffered damage to a wing which necessitated a wing replacement. However, the new wing was not a true "Fairey" but was made by the Blackburn company under contract to Fairey and it just didn't fit properly.  Also, some of our planes were getting a bit geriatric and they were being retired as new planes became available.

I was sent out from 'Vengeance' to Ayr, Scotland to collect a new plane and leave the old one there.  I also had to pick up a new observer, a young "Sub" who had not yet experienced a deck landing.  After I had identified myself she (H.M.S. Vengeance) turned into the wind for me and I made my turn around the stern, at the same time lowering the hook, wheels and flap.  We then found ourselves in the water.

It took me a while to get out as my foot was somehow wedged under the seat and by the time I got free - leaving a shoe behind - and reached the surface the young Sub was in the dinghy, probably mentally composing his letter of resignation.  I started to swim to the dinghy but was not making much progress in the choppy sea when I noticed a great yellow mass floating behind me.  I then realised that I had forgotten to shed my parachute.  It had opened and I had been trying to tow it.  A passing Navy launch plucked us from the dinghy and returned us to the ship, the observer in shock and me embarrased.

It so happened that the ship's photographer took photos of me in the approach and one, under a magnifying glass, showed that one flap lowered before the other.  Perhaps I should have been prepared for such an emergency but I supposed I would have been too low to do anything.  Just as well it didn't happen a few days earlier when I ferried a RN Captain from Ayr to 'Vengeance'.

When we returned to fleet anchorage I was told to report to the Captain in his day cabin.  (This was the first time I saw his VIP quarters.)  He told me about the flap showing in the photograph, told me not to worry and poured me a large gin."

The accompanying photograph was presented to Dad by the photographer who happened to be on deck and "at the ready" at the time.  (My father's view was that he was always on hand for deck landings and was sorely disappointed every time someone safely made it on deck.) 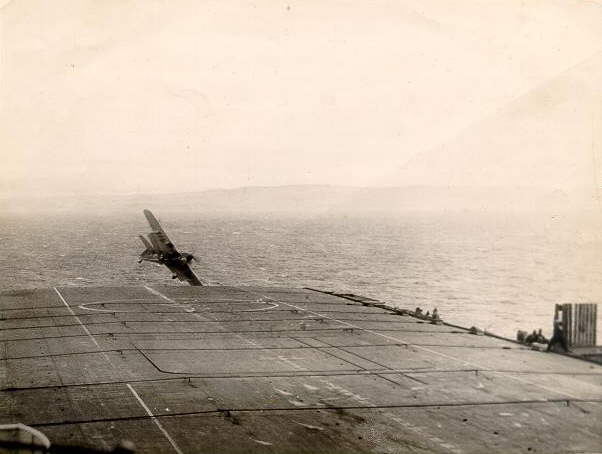 My father, now in his mid 80s is living in Napier, New Zealand although he is not in the best of health.  He has derived an enormous amount of interest and pleasure from the HMS. Vengeance website and has asked if, on his behalf, I could seek information on the whereabouts of his crew - Lt Robert (Toby) Tobias, Observer, and PO Robert Hennessey, TAG.  Any information on what happened to either, or their current whereabouts, would be enormously well received by Dad.

One final point.  Dad left 'Vengeance' in Malta when he was detached from 812 squadron and left for New Zealand on leave.  He was very touched by the information in the 'In Memorium' page that revealed to him that a couple of 812 squadron personnel whom he had known as midshipmen, subsequently lost their lives in flying accidents.