Extract from the History Book of The Royal Hong Kong Yacht Club.

Reproduced with the kind permission of:-

On 17th September 1945, the day of the formal signing of the surrender by the Japanese. the Yacht Club on Kellett Island was 're-opened' by Officer's and Men from HMS. Vengeance, a 14,000 ton Light Fleet Aircraft Carrier. In the harbour, the surrender ceremony was celebrated with a 21-gun salute and a flypast of Corsairs of the Fleet Air Arm, followed in the evening by fireworks, a search-light tattoo and a brilliant display of every lights and coloured rockets fired from warships, the Naval Dockyard and Murrary Barracks.

The Yacht Club was in no position to start operating again and as an interim measure it was decided to allow the Services to use it for recreational purposes. In the following two weeks, the task of restoring the Club premises to some semblance of order was undertaken by the Officer's and Men from Air Squadrons 812 and 1850 on board HMS. Vengeance including Commander E.H. Stokes RN, Lieutenant Talbot Scobie RNVR and Sub-Lieutenant G. Dunn RNVR, the ship's Electrical Officer who provided light from 24 starter batteries.

The basic plumbing was reconnected and the building cleaned up as much as possible and by the 2nd October 1945 the Club was in good enough condition for it's official opening as one of four recreational clubs for Officers of the Services, the others being in the Peninsula Hotel, the Lido in Repulse Bay and the Gloucester Hotel in Pedder Street where Gloucester Tower and The Landmark are today.

The ceremony was conducted by Commander-in-Chief Rear Admiral Harcourt in the presence of the Commodore D.H. Everett, Captain D.M. Neame, Commanding Officer HMS. Vengeance and a number of other Officers. To mark the opening, four dinghies took part in a race which was won by Commander Stokes, and a lifebelt from HMS. Vengeance was hung in the lounge bearing the inscription;

"Presented to the Royal Hong Kong Yacht Club by Officers and Men, HMS. Vengeance, who reopened the Club on September 17th 1945".

The 'presentation' remains in the Royal Hong Kong Yacht Club, to this day. 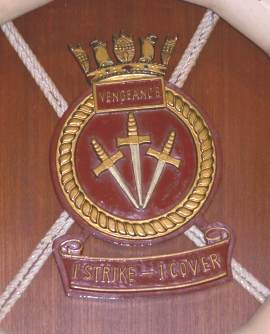 Thanks to the Royal Hong Kong Yacht Club for their permission to use this extract from their History Book and the photograph's.